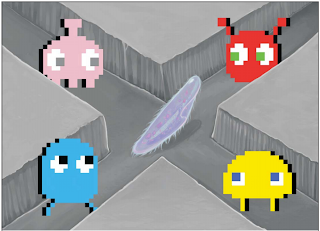 Games have become important part of  the cultures, bringing lots of entertainment and creativity to the societies. Beyond the traditional understanding of games, recently researchers have started to explore new sets of "serious games" that could provide effective means, including  public understanding of science, crowd-source based diagnostics, physical therapy and as well as prediction of the protein folding.

In this post, we will summarize these recent efforts addressing the biology games for biomedical research and related applications:

Games are a significant and defining part of human culture, and their utility beyond pure entertainment has been demonstrated with so-called ‘serious games’. Biotechnology – despite its recent advancements – has had no impact on gaming yet. Here we propose the concept of ‘biotic games’, i.e., games that operate on biological processes. Utilizing a variety of biological processes we designed and tested a collection of games: ‘Enlightenment’, ‘Ciliaball’, ‘PAC-mecium’, ‘Microbash’, ‘Biotic Pinball’, ‘POND PONG’, ‘PolymerRace’, and ‘The Prisoner's Smellemma’. We found that biotic games exhibit unique features compared to existing game modalities, such as utilizing biological noise, providing a real-life experience rather than virtual reality, and integrating the chemical senses into play. Analogous to video games, biotic games could have significant conceptual and cost-reducing effects on biotechnology and eventually healthcare; enable volunteers to participate in crowd-sourcing to support medical research; and educate society at large to support personal medical decisions and the public discourse on bio-related issues.

We describe a crowd-sourcing based solution for handling large quantities of data that are created by e.g., emerging digital imaging and sensing devices, including next generation lab-on-a-chip platforms. We show that in cases where the diagnosis is a binary decision (e.g., positive vs. negative, or infected vs. uninfected), it is possible to make accurate diagnosis by crowd-sourcing the raw data (e.g., microscopic images of specimens/cells) using entertaining digital games (i.e., BioGames) that are played through PCs, tablets or mobile phones. We report the results and the analysis of a large-scale public BioGames experiment toward diagnosis of malaria infected human red blood cells (RBCs), where binary responses from approximately 1,000 untrained individuals from more than 50 different countries are combined together (corresponding to more than 1 million cell diagnoses), resulting in an accuracy level that is comparable to those of expert medical professionals. This BioGames platform holds promise toward cost-effective and accurate tele-pathology, improved training of medical personnel, and can also be used to manage the “Big Data” problem that is emerging through next generation digital lab-on-a-chip devices.


4) Foldit [ at University of Washington ]

Foldit is a multiplayer online game in which players collaborate and compete to create accurate protein structure models. For specific hard problems, Foldit player solutions can in some cases outperform state-of-the-art computational methods. However, very little is known about how collaborative gameplay produces these results and whether Foldit player strategies can be formalized and structured so that they can be used by computers. To determine whether high performing player strategies could be collectively codified, we augmented the Foldit gameplay mechanics with tools for players to encode their folding strategies as “recipes” and to share their recipes with other players, who are able to further modify and redistribute them. Here we describe the rapid social evolution of player-developed folding algorithms that took place in the year following the introduction of these tools. Players developed over 5,400 different recipes, both by creating new algorithms and by modifying and recombining successful recipes developed by other players. The most successful recipes rapidly spread through the Foldit player population, and two of the recipes became particularly dominant. Examination of the algorithms encoded in these two recipes revealed a striking similarity to an unpublished algorithm developed by scientists over the same period. Benchmark calculations show that the new algorithm independently discovered by scientists and by Foldit players outperforms previously published methods. Thus, online scientific game frameworks have the potential not only to solve hard scientific problems, but also to discover and formalize effective new strategies and algorithms.


4) ERIAInteractive [ at University of Wisconsin ]

The Educational Research Integration Area (ERIA) studies how interactive digital tools -- like video games -- might transform learning. Our goal is to improve public understanding of science through games. These games are designed to be used in homes, schools, and after school settings, because we think the future of learning lies in connected learning across these contexts. Tomorrow's learners will access learning resources on their digital tablets, phones, and computers, and our learner profiles will cross these contexts. Learners, parents, teachers, and administrators have unprecedented opportunities for using data to improve learning.

To reach tomorrow's learners, educational materials have to be deeply engaging. We build games that can capture intrinsically interesting aspects of science and present it authentically to learners of all ages. We firmly believe that education should be energizing and life enhancing. Our games seek to put players in roles where they use science to do interesting things, setting up opportunities for learners to develop new identities -- and potentially even careers -- as people who affiliate with science.

CAPTCHAs (Completely Automated Public Turing test to tell Computers and Humans Apart) are widespread security measures on the World Wide Web that prevent automated programs from abusing online services. They do so by asking humans to perform a task that computers cannot yet perform, such as deciphering distorted characters. Our research explored whether such human effort can be channeled into a useful purpose: helping to digitize old printed material by asking users to decipher scanned words from books that computerized optical character recognition failed to recognize. We showed that this method can transcribe text with a word accuracy exceeding 99%, matching the guarantee of professional human transcribers. Our apparatus is deployed in more than 40,000 Web sites and has transcribed over 440 million words.